The two teams line up as they do at the start of all football games. The exact formation is a matter of choice. Kick-off is decided by the toss of a coin. The side taking kick-off has a player on the centre spot with the ball at his feet. No player from the other side is allowed into the centre circle.

A player can run in any direction, in a straight line or zig-zag, from square to square, provided that the squares touch each other. 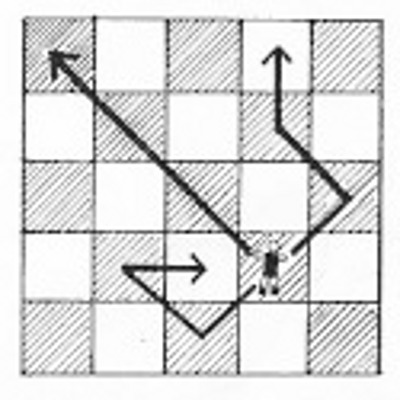 Some ways of a player moving three squares.

When a player has the ball, he can take it with him wherever he moves. As an alternative to running with the ball, the player can kick it. When kicked, the ball moves in a straight line (forward, backward, sideways, or diagonally across) twice the number of squares shown by the dice. For example, a throw of 4 can send the ball eight squares away.

If a player stands anywhere in the path of the moving ball, he stops the ball. If this player is team mate, the kick has become a pass. To make a pass is of great value because you keep possession of the ball and have an extra turn with the dice. But no side is ever allowed more that then three throws in a row.

If a kick is not intercepted, the ball will land on an empty square. The first player, of either side, to reach that square, will take possession of the ball. 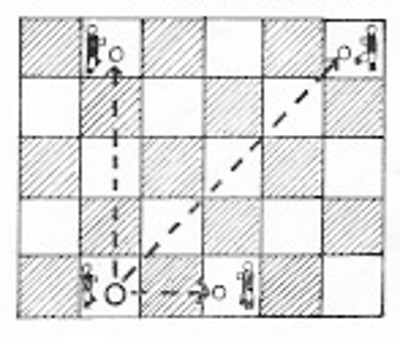 Some possible passes with a 2.

As you become more skillful, you will try to move forward with a series of passes. To achieve this you will make good use of the combined moves. The two moves allowed by a throw of 2/2 or 3/3 may be combined in three ways: 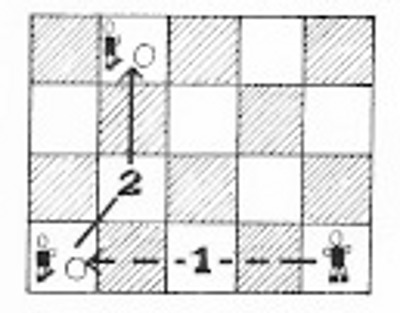 The first player passes to a team mate who then runs with the ball. 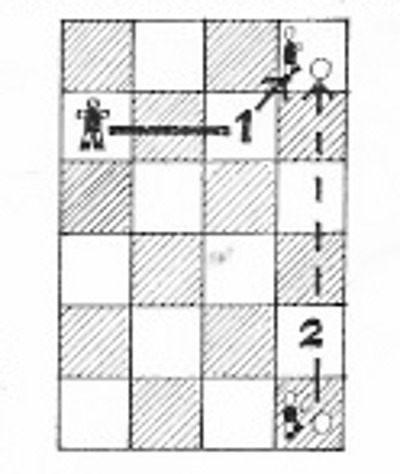 The first player runs into a position where he receives a pass. 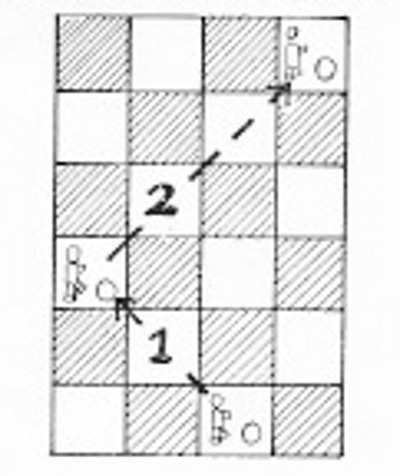 The first player passes to a team mate who in turn makes a pass.

All these combined moves give you an extra turn with the dice. But remember that in every case two separate players are involved and that one player cannot both run and pass the ball in one move.

Positions before and after successful tackle.

If you throw a 1 when one of your players stands on a square right next to the player with the ball, it counts as a foul. For in this case your player does not have enough room to make a proper tackle. The free kick resulting from the foul is taken by the player with the ball and the ball moves three times the number of squares shown by the dice. A 3/3 will send the ball nine squares away, but no player moves.

If a free kick is awarded in the penalty area against the defending team, it is a penalty. After all the players have been moved out of the area and the goal-keeper has been placed on the goal line, the kick is taken by one player from the penalty spot. As the ball moves twice the distance indicated by the dice, any throw other than 1, will result in a goal.

The goalkeeper is never allowed to leave the penalty area. But, when running, he moves twice the number of squares shown by the dice and when he kicks the ball, the ball goes three times the squares shown on the dice.

A goal is scored when the ball goes over the goal line. A player shooting from the edge of the penalty area, for example, will need at least a throw of 3/3 to score. 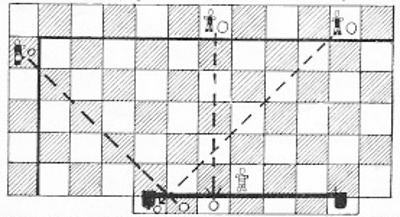 Some examples of goals scored with a throw of 3/3

Winning the game: The first team to score three goals wins the game.

A big thanks to Paul at The Beautiful Games for the scans.

In France, "World Soccer" is known as "FOOT" or "BUT". The rules are a bit different as each player is required to throw two dices, one for moving a player and another one for moving another player or kicking the ball.
Posted by Ugo Capeto at 12:44 PM No comments:

Ugo Capeto
Feel free to email me at sportsboardgames [at] gmail [dot] com. Thanks in advance, Ugo.